Here are two American military men who BOTH achieved in a BIG WAY. And most deservedly so! 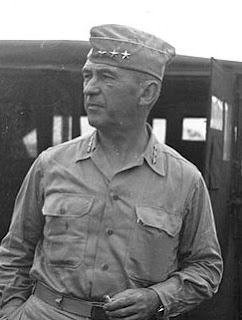 Walter Krueger, most noted for his command of the U.S. Sixth Army in the Southwest Pacific Area [SWPA] during the Second World War [WW2].

"Walter Krueger . . . was an American soldier of German descent . . . best known for his command of the Sixth United States Army in the South West Pacific Area during World War II. He was the first soldier to rise from the rank of Private to General in the United States Army."

"Walter Krueger was born in Flatow, West Prussia (German Empire) (since 1945 Złotów, Poland), the son of Julius Krüger, a Prussian landowner who had served as an officer in the Franco-Prussian War"


"General John Malchase David Shalikashvili . . . is a retired officer of the United States Army who served as Chairman of the Joint Chiefs of Staff from 1993 to 1997. He was born in Warsaw, Poland to Georgian refugee parents."

"General Shalikashvili is the only foreign-born to reach the rank of four-star General in the U.S. Army." [this is not quite correct!]

Shalikashvili was not only a four-star officer, but Chairman of the Joint Chiefs. The highest position possible within the ranks of the U.S. military. It is worth noting that both Krueger and Shalikashvili were four-star generals, Krueger however holding that rank only temporarily. [retiring as a four-star flag officer]

"He entered the Army as a private, enjoyed it, and applied to Officer Candidate School. He was commissioned as a second lieutenant in 1959."

Shalikashvili in particular is from a noble house. His father having the title of Prince! The life of the Shalikashvili family while living in the U.S. being very mundane and normal, hardly princely in any way. John throughout his entire life has just been another Joe! But another Joe who made it BIG!!

It is possible for the immigrant, the foreign-born, arriving in the U.S., to accomplish remarkably well. That includes the military too. It can be done.