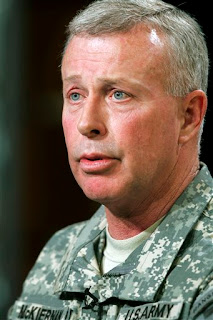 This is a hot button item on the evening news today:

"WASHINGTON — The Pentagon will replace its top general in Afghanistan as President Barack Obama tries to turn around a stalemated war, defense officials said."

General Mc Kiernan had been the most senior American commander in Afghan for about a year. Wore two hats, possibly three? Was commander of American forces and the overall NATO force waging the Afghan counter-insurgency campaign. Too, commanded Afghan military units when in joint operations with the American/NATO military?

He is being replaced by:

* Lt. Gen. Stanley McChrystal. "McChrystal has had a top administrative job at the Joint Chiefs of Staff for less than a year. He is a former commander of the Joint Special Operations Command."

* Lt. Gen. David M. Rodriguez. "who serves as top military aide to Gates, will be deputy to McChrystal in Afghanistan"

THIS HEADLINE REGARD THE "STEPPING DOWN" OF GENERAL MC KIERNAN IS NOT QUITE CORRECT!!

Mc Kiernan was RELIEVED OF DUTY!! Told to go, his performance not being adequate!!

This is the first time THIS SORT OF THING HAS HAPPENED TO A U.S. MILITARY MAN IF OVER FIFTY YEARS NOW. Since the time Doug Mac Arthur was let go in Korea.

Mc Kiernan, so the story goes, as reported, is felt TO NOT HAVE ENOUGH ADEQUATE CREDENTIALS TO FIGHT A COUNTER-INSURGENCY TYPE OF CAMPAIGN!!

I would ask the question - - WHO THE HELL DOES HAVE THE ADEQUATE CREDENTIALS??!!

I also ask the question - - did Secretary Gates arrive at the conclusion that General Mc Kiernan must go - - in consultation with other military men??

If so, with regard to "consultation", to what extent does UCMJ apply in such cases? To criticise a commander in the field as being inadequate for the task is "insubordinate", or "disrespectful" speech under UCMJ? I specifically have Article 89 and 134 of the UCMJ in mind. For a subordinate merely to even SUGGEST THAT A SENIOR COMMANDER IS NOT UP TO THE JOB IS A VIOLATION OF UCMJ? I know this is usually felt to be a "gray" area, open to interpretation, but relieving such a senior commander during mid-tour is very, very rare!! Truth is not generally considered to be a defense under UCMJ.