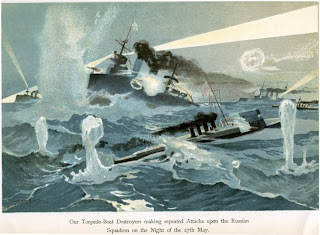 With regard to those Japanese torpedo boats attempting the night attack - - Tsushima:

THIS WAS THE FORM OF ASYMMETRIC WARFARE AT SEA?

Torpedo boats, a profusion of them, attacking during hours of darkness, attempting to saturate the defenses of the enemy, firing torpedoes in abundance, small putt-putt boats inflicting serious damage in what would normally be considered to be an unfair match, large capital warships against small, lightly armed, sans armor protection small war craft [torpedo boats]!!

It was thought - - at the time, during the pre-Dreadnought era of naval development and warfare, that the large iron-clad, big gun battleships of the period, ponderous vessels, were extremely susceptible to successful attack by a much smaller but much more agile, speedy warship, the torpedo boat.

Attack such as occurred during the night time action at Tsushims.

Surface vessels, small in size, armed almost exclusively with torpedoes, were an important adjunct to the pre-Dreadnought fleets of the time [1889-1906?]!

"the new weight of armour slowed them [battleships], and the huge guns needed to penetrate that armour fired at very slow rates. This allowed for the possibility of a small and fast ship [torpedo boat] that could attack the battleships, at a much lower cost. The introduction of the torpedo provided a weapon that could cripple, or sink, any battleship."

"They [torpedo boats] were relatively inexpensive and could be purchased in quantity, allowing mass attacks on fleets of larger ships. The loss of even a squadron of torpedo boats to enemy fire would be more than outweighed by the sinking of a capital ship."

Indeed, the French at one point conceived of an entire naval "philosophy" and doctrine "advocating" the use of small boat attack - - "as the way to go!"

"The Jeune École ("Young School") was a French naval school of thought developed during the 19th century. The concept . . . advocated for the use of small, powerfully equipped units to combat a larger battleship fleet"

Consider this Scientific American article from 1887:

An Italian torpedo boat, built by an English concern, reputed to the be latest and greatest of the day. Capable of unheard of speeds, the main armaments consisting almost solely of torpedoes. 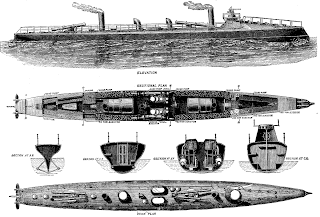 "The armament consists of two bow tubes built in the boat. There are two turntables, as shown in the illustrations, each fitted with two torpedo tubes . . . There are two quick firing three pounder guns on deck, and there is a powerful search light"

The response to the threat posed by the torpedo boat was to add to the various capital ships searchlights and rapid firing secondary armaments, guns of smaller caliber.

However, the threat as manifested by the torpedo boat never actually occurred? Was a threat much overrated? Here from a web site devoted to the pre-Dreadnought era:

"Torpedo Effectiveness"
"Torpedoes were one of the great disappointments of this era. Their sale and support had been pushed to a fever pitch, and it was widely thought that their use alone would decide the outcome of entire wars. The difficulties encountered in real-life use on several occasions resulted in investigations . . . For the major part of the pre-dreadnought era, torpedoes continued to be a rather closely guarded, over-rated, very expensive and rather inaccurate, short ranged weapon."