(Chinese: 三保太監下西洋) or "Zheng He to the Western [Indian] Ocean"

Here from the author calling himself the Centurion, through Jan and AfricanCrisis:

"The following brilliant article[s] has been written by the anonymous contributor with a strong intelligence background here in Africa. He knows his stuff. That is as much as I'm allowed to tell." - - Jan.

"Indeed, the entire continent regards AFRICOM with great suspicion, especially General Ward’s appointment as its commander – an African American general who the US has believed will find instant rapport with African leaders, due to his apparent African heritage. This has, once again, illustrated the US’s lack of understanding towards Africa, as General Ward, despite his competence as a soldier, has no understanding of Africa or of its people. He is as African as David Beckham is Chinese." 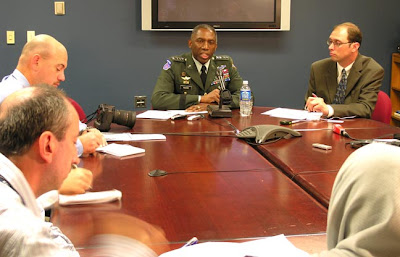 I do recall very well my instantaneous and intuitive reaction upon hearing that General Ward was appointed head of Africom. That this WAS DEFINITELY A MISTAKE - - AND BIG TIME!! The Africans will see the appointment of Ward as pandering, acting in a condescending manner to the black Africans!!

At any given moment, there only eleven four-star generals in the American Army. Ward is undoubtedly highly competent, but the selection was a poor choice?

And the fact that Africom only can operate OUT OF A EUROPEAN BASE IS ALSO AN IMPEDIMENT? NO AFRICAN COUNTRY IS WILLING TO HOST AN AMERICAN MILITARY HEADQUARTERS ON THEIR SOIL? WHAT DOES THAT SAY?

"The Chinese won’t have to fight big battles, commit troops, prepare defences or launch attacks. Instead, they have come armed with briefcases, bank guarantees and credit lines. Their camouflage uniforms have been swapped for suits and ties."

"They have bought out large tracts of Africa, carefully targeting their purchases towards areas known to be rich in resources. They have opened mines, built roads and other supporting infrastructure, planned and developed towns, invested in banks, erected factories - and settled thousands of Chinese across the continent - an army in the making and waiting."

And this article regarding the Chinese "invasion" does NOT mention the historical context. From six hundred years ago. The Chinese treasure fleet of Zheng He. Sailed into the Indian Ocean and traded along the Swahili coast as far south as modern Tanzania! Surprisingly so, THERE IS A VERY-OLD RELATIONSHIP BETWEEN CHINA AND AFRICA!

Too, this "invasion" of Africa by the Chinese is also part and parcel of the Chinese "String of Pearls" strategy? Establish bases, covenants, agreements, etc., with foreign powers all throughout the Indian Ocean region. For the future, see that raw matrials from Africa and the Middle East will flow unimpeded? This too is a consideration of the Chinese?

What the Centurion says here is more than mere speculation? Could be!