From the outstanding Internet web site "War is Boring" several articles the topic of which is the latest U.S. Naval aviation UAV warplane. MQ-25 Stingray.

AT THIS EXACT MOMENT AND AS CONCEIVED WILL FUNCTION ONLY AS A TANKER AIRCRAFT [CARRIER-BORNE] BUT HAVING MORE OR LESS AN UNLIMITED POTENTIALITY FOR FUTURE GROWTH.

"The U.S. Navy’s new MQ-25 Stingray aerial-refueling drone bears an uncanny resemblance to an experimental U.S. military plane from the late 1970s. And that similarity could point to the way for the Stingray’s potential evolution from a tanker into a stealthy surveillance and strike aircraft." 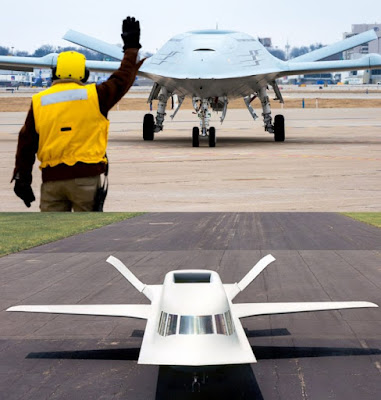 Finished and flying product [MQ-25] top. Tacit Blue stealth concept shown below. Curved surfaces for stealth and not a faceted surface [as was the F-117]. Tacit Blue was a fly-able aircraft [image as shown not having a proper scale] but very unstable.

"In choosing Boeing to build the MQ-25 Stingray multi-mission tanker, the Navy has opened the next major chapter in a story that began in the mid-1990s, when the sailing branch worked alongside the U.S. Air Force to develop a fighter-like drone."

This is a stealth warplane based on OLDER technology [1970] but still do-able now and effective to the extent needed. GOOD TO GO NOW RATHER THAN BETTER TOMORROW!