As is pertinent to that prior blog entry:

Thanks to the AP and the article by Bassem Mroue.

"BEIRUT (AP) — A Syrian military official said Friday that an aerial "aggression" by the U.S.-led coalition on a government military position near the border with Jordan the day before killed several soldiers and caused material damage."

AND THIS IS WHAT IT IS ALL ABOUT? THAT BORDER CROSSING OF AL WALEED MOST VITAL! 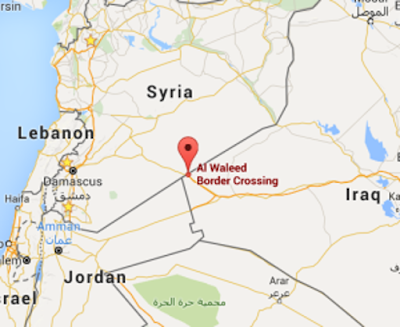 Al-Waleed at that perfect juncture the border between Jordan, Iraq and Syria. A land route which would connect Iran to Syria through Iraq as is obvious. War munitions as airlifted to the Syrian from Iran too subject to Israeli attack. This is an alternative. But capture and consolidation of the crossing first a must.

That objective again of the combined Syrian, Iranian, Hezbollah force to secure the border crossing. Allowing for munitions to be shipped overland from Iran to Syria.

IT IS AT THE AL WALEED BORDER CROSSING IN THE SYRIAN DESERT THAT WORLD WAR THREE WILL BEGIN? SEEMS STRANGE, DOESN'T IT!