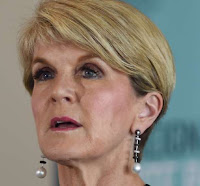 From the Australian media and the image thanks to AAP/Lukas Coch.

Warning Australia!! Stern rebukes and admonishments are directed at you.

Comrade Kim of North Korea with typical Stalinist doggerel responding at least in part I might think to that most recent  deployment of U.S. Marines to Darwin, MRF 2017?

"Foreign Minister Julie Bishop has hit back at North Korea after the reclusive state warned Australia could be the target of a nuclear weapons strike if it continued to 'blindly' follow the United States."
. . . .

Think twice! Maybe a multitude of times! Comrade Kim let us be frank just cannot get along with anyone! As simple as that.

Consider too that the Australian military remains part of the United Nations Command Korea:

"United Nations Command Rear is located at Yokota Air Base, Japan, under a Royal Australian Air Force group captain. Its task is to maintain the SOFA that permits the UNC to retain a logistics rear and staging link on Japanese soil."

The Australian public is aware of their continued role and contribution to the United Nations Command? It might surprise many that degree of involvement existing!