Came across this quite by accident. As pertains to that radio equipment used by Gladio stay-behind units associated with the NATO mission.

First there was SP-15 and then there was Harpoon. A level of technology rather remarkable, these radio sets greatly resembling the type of communications that would have been  used by the British Special Operations Executive [SOE] during the Second World War [WW2]!

"The Cold War started immediately at the end of WWII and would last until the fall of the Iron Curtain in 1989. During this period of great tension between East and West, most European countries developed an underground army of secretly trained agents that would stay-behind in the event of an invasion by the Russians. The task of the stay-behind organisations was to pass important information to the government(s) in exile and to carry out sabotage activities."

The SP-15 is a complete radio station that was developed in Germany in the early 1960s by Wandel & Goltermann for the Bundes Nachrichtendienst (BND). It was intended for agents, special forces (SF) and stay-behind organisations (Gladio). 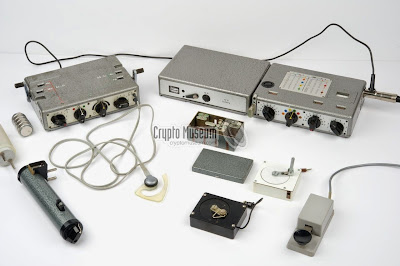 Referred to as a "spy set". More like a CLANDESTINE RADIO SET WHEN USED BY STAY-BEHIND UNITS. Guerrilla/insurgents/partisans and not spies as that term spy generally, commonly and ordinarily understood.

"The SP-15 is a complete spy radio station that was developed in Germany in the early 1960s by Wandel & Goltermann and H. Pfitzner for the German Intelligence Agency Bundes Nachrichten­dienst (BND). It was intended for special forces (SF) and stay-behind organisations (Gladio). Certain parts of the SP-15 radio station were also used by the organizations of other countries.

Allowing for a rapid transmission of a message. AND hand cranked!

"The RT-3 is an electro-mechanical burst encoder, developed by Wandel & Goltermann in Germany around 1958 for the Bundes Nachrichten Dienst (BND), the German Intelligence Agency. It was used in combination with the SP-15 spy set but also with the SP-20. It allows a series of 25 pre-recorded numbers to be transmitted at high speed in Morse code. The abbreviation 'RT' probably stands for Rapid Transmitter. The RT3 was also used by NATO and for Stay Behind."

Harpoon a MUCH MORE sophisticated and highly developed level of technology! 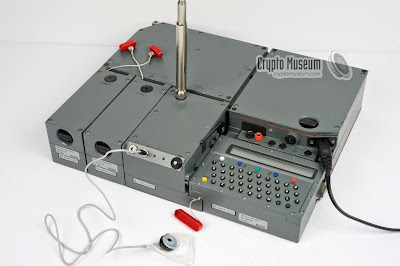 "The FS-5000 was a fully digital radio set, capable of sending and receiving secure messages. It was developed in 1985 by AEG Telefunken in Ulm (Germany) and was part of a pan-European communication system used by various stay-behind organisations (Gladio)."

Gladio and the various stay-behind units evidently having recruited radio amateurs [hams] to function as communicators in time of war that Soviet invasion and conquest of western Europe.

The life expectancy of a amateur radio operator in a Soviet occupied nation could be expected to be short and brutish.