A counter to those allied bomber streams as were devastating German during the Second World War [WW2]. Almost an expedient device, a desperate measure in response to desperate circumstances. 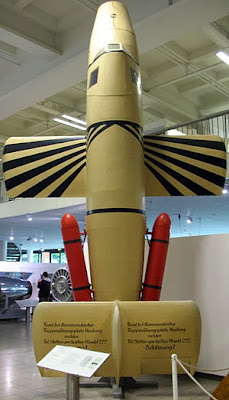 Natter takes off vertically. Those two red booster rockets strapped to the side of the plane used on take-off for additional thrust. Tiny itty-bitty rocket plane this image gives you a sense of scale!

"The Bachem Ba 349 Natter . . . was a World War II German point-defense rocket powered interceptor, which was to be used in a very similar way to a manned surface-to-air missile. After a vertical take-off, which eliminated the need for airfields, the majority of the flight to the Allied bombers was to be controlled by an autopilot. The primary mission of the relatively untrained pilot, was to aim the aircraft at its target bomber and fire its armament of rockets. The pilot and the fuselage containing the rocket motor would then land under separate parachutes, while the nose section was disposable."

The addition of the pilot almost incidental? Guidance to the target after A VERTICAL TAKE-OFF by auto-pilot. Rockets rather than gunfire the weapon of choice! 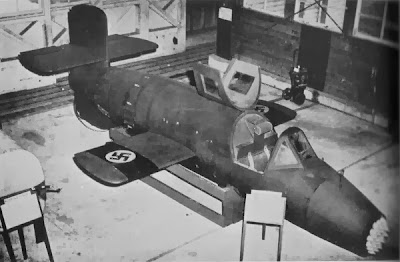 A multitude of rockets carried in the nose. The pilot fires the entire complement and then parachutes to safety. This WAS NOT A SUICIDE MISSION AND THIS IS NOT A SUICIDE WARPLANE! Swastika as found on the wings not allowed if this static display in Germany!

"The Natter was intended to fly up and over the bombers, by which time its Walter motor would probably be out of propellant. Following its one-time attack with its rockets, the pilot would dive his Natter, now effectively a glider, to an altitude of around 3,000 m, flatten out, release the nose of the Natter and a small braking parachute from the rear fuselage. The fuselage would decelerate and the pilot would be ejected forwards by his own inertia and land by means of a personal parachute."

"Desperate circumstances require desperate solutions?" Natter unless deployed in enormous numbers massed the effectiveness of which understood to be highly questionable.

Amazing. Never heard it before.