That capture of Missionary Ridge and Lookout Mountain during the American Civil War a major event in the conflict and recognized so at the time, in two months the course of the war having changed dramatically to the advantage of the Union.

"the Union soldiers continued the attack against the remaining lines, seeking refuge near the crest of the ridge (the top line of rifle pits were sited on the actual crest rather than the military crest of the ridge, leaving blind spots). This second advance was taken up by the commanders on the spot, but also by some of the soldiers who, on their own, sought shelter from the fire further up the slope. The Union advance was disorganized but effective; finally overwhelming and scattering what ought to have been, as General Grant himself believed, an impregnable Confederate line."

That charge uphill and the capture of Missionary Ridge spontaneous, impromptu, unauthorized, and perhaps even in disobedience to orders!!

And that man in the lead a junior officer, inspiring and motivating his charges forward, Arthur McArthur Jr. That name McArthur in the aftermath of the war changed to MacArthur. Arthur the father of course of the famous Douglas. 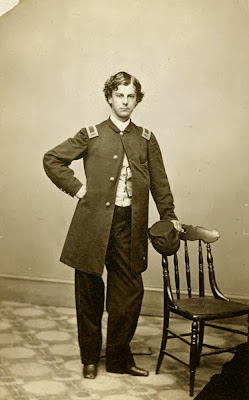 Brevet Colonel McArthur at age nineteen. That family trait of bold combat action even to the point of recklessness and disobedience a family trait?

"At the Battle of Missionary Ridge on November 25, 1863 during the Chattanooga Campaign, the 18-year-old MacArthur inspired his regiment by seizing and planting the regimental flag on the crest of Missionary Ridge at a particularly critical moment, shouting 'On Wisconsin.'"

"For these actions, he was awarded the Medal of Honor. He was brevetted colonel in the Union Army the following year. Only 19 years old at the time, he became nationally recognized as 'The Boy Colonel'"

Those defending Confederate troops having occupied the topographic crest of the ridge and NOT the military crest, allowing for "blind spots" and voids where Yankee soldier surmounting the ridge could use for cover. A grave error of troop placement!

McArthur Jr. having received the Congressional Medal Honor for his bravery at Missionary Ridge, that decoration only awarded some twenty years later, and then ONLY after intense and prolonged lobbying by the Congressman uncle of Arthur! All that for comportment it can be suggested was fool-hardy and again, perhaps even disobedient. Behavior nonetheless carrying the day in a manner heralded across the nation in the media as it existed at the time.