Once again from StrategyPage we have this item, that arms race in the area of the South China Sea continuing, the government of the Philippines seeking weaponry to protect that national territory it deems sovereign but as the possession of which contested with the communist government of China.

"October 18, 2013: The government signed the agreement to buy 12 South Korean TA-50 armed trainers for the air force. These advanced jet trainers are built to also serve as fighters or ground attack aircraft. In 2005, the air force removed from service its last 8 operational F-5 fighters. These 1960s era aircraft [F-5] were not much of a match for more recent warplanes and were expensive to maintain"

That new fighter plane as chosen by the Philippines for the air superiority mission the South Korean [ROK] TA-50/FA-50. 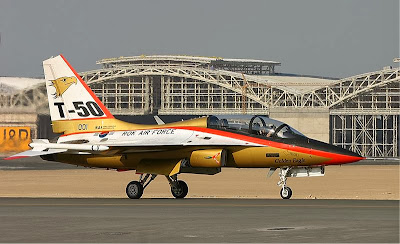 That trainer warplane that can quickly and with relative ease configured into a "fighter plane" that TA-50, a trainer capable of supersonic operation.

"Indigenous" to South Korea, of ROK manufacture but also reliant on foreign components to a great extent.

And not a bad warplane it seems, AND MOST IMPORTANT FOR THE PHILIPPINES FROM THE STANDPOINT OF PRICE, RELATIVELY INEXPENSIVE WHEN COMPARED TO OTHER WARPLANES!

Who said the military and top-of-the-line war making hardware was EVER cheap?

That Philippine air force at least since 2005 NOT EVEN POSSESSING AN AIR SUPERIORTY FIGHTER PLANE? The last of the American F-5 as originally flown in the 1960's now retired!

That Golden Eagle based on the American F-16 airframe, an engine either of American or European manufacture, and avionics obtained from a variety of nations.

That Filipino military now responding from the perceived Chinese threat, purchasing ships from Italy, the United States and Japan, and NOW warplanes from ROK! The Filipino apparently has made that decision, millions [billions] for defense, but not a penny for tribute!

If it is not for chinese aggression, the Philippines wont arm themselves because they know that even if we have a treaty with the US, they wont come in case china invades us...

Those pigs in our Government, the Philippine Government and its past leaders should be fed to the sharks in the west Philippine sea together with the communist NPA and abu sayaf...

Philippines is a strong nation in the past but because in corruption, it has met its downfall...