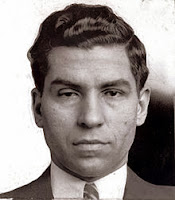 That war time record [WW2] of the American gangster Salvatore Luciano made public, some aspects of which were not known to me.

The incarcerated "Lucky", as he was called, in 1942, agreeing to contribute resources of the American Mafia in return for more lenient treatment.

Eventually deported to his native Sicily in 1946 the "deal' as struck between organized crime in New York City and the American government a marriage of convenience and expediency, a wartime measure only.

That agreement to include at a minimum:

* Mafia uses resources already in place to guard the docks of NYC from German sabotage.

* NO dockworker union strikes, work stoppages, or slowdowns for the duration of the war.

* Contacts with the Sicilian Mafia made available to American military forces prior to the Operation Husky [the invasion of Sicily].

Luciano moved to a less restrictive prison environment closer to home and allowing for more contact with his gangland associates.

Those NYC docks absolutely important to the American war effort running smoothly the entire length of the war, no interruption.

Understand too that the Mafia as might be realized, taking advantage of a situation I might assume, a degree of pilferage and theft from shipments passing through the port of NYC tolerated to an extent.

HITLER HOWEVER HAVING FORBADE ALL SABOTAGE ON AMERICAN SOIL PRIOR TO PEARL HARBOR. INDEED, NO GERMAN SLEEPER SABOTAGE APPARATUS IN PLACE EVEN PRIOR TO 7 DECEMBER!

SUBSEQUENT GERMAN EFFORTS SUCH AS OPERATION PASTORIUS ALL FOR NAUGHT, THE SABOTEURS  ALL ROUNDED UP WITHIN TWO WEEKS IN THE AFTERMATH OF LANDING BY SUBMARINE.

The Sicilian Mafia cooperative with the allied invasion force, 1943? Facilitators and expediters working "behind the scenes". As was promised by "Lucky" as was delivered?

The magazine article "INVASION OF SICILY" as feature in the "AFTER THE BATTLE" issue number # 77 makes no such mention of such aiding and abetting. Mafia assistance is not something the allies would like to talk about? Perhaps not.