Yet one more insurgent/guerrilla/terrorist organization the incorporation of women into fighting units being commonplace and pervasive.

Kurdish fighters, insurgents/guerrillas/terrorists waging a decades long hit-and-run type form of warfare against the Turkish nation and government. An insurgency being strongly communist oriented, the PKK designated as a terrorist organization by the Turk, NATO and the United States.

"The Kurdistan Workers' Party . . . is a Kurdish organization which has since 1984 been fighting an armed struggle against the Turkish state . . . The PKK's ideology was originally a fusion of revolutionary socialism and Kurdish nationalism"

Read this multi-page Internet article from CNN - - the women fighters of the PKK most resolute and determined, SOME OF THOSE WOMEN LITERALLY SPENDING DECADES IN THE MOUNTAINS THE GUERRILLA DEDICATED TO THE CAUSE PERHAPS IN A WAY A MAN WOULD NOT EVEN BE! 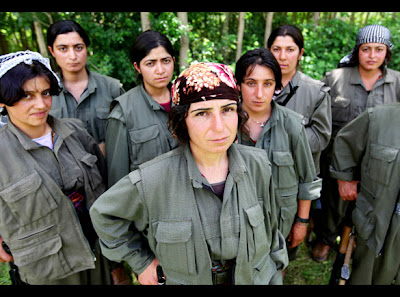 "The PKK has an idealistic philosophy, one that combines Kurdish nationalism with certain communist goals, such as equality and communal ownership of property. The fighters here say that their cause has evolved beyond a desire for a Kurdish state -- that they are now fighting to generate dramatic social change"

About one-third of the estimated 3,000 Kurdish PKK mountain fighters women! Political indoctrination an important factor for all guerrilla units, AN ABSOLUTE FORM OF CELIBACY ALSO PRACTICED! This is serious stuff, no hanky-panky. 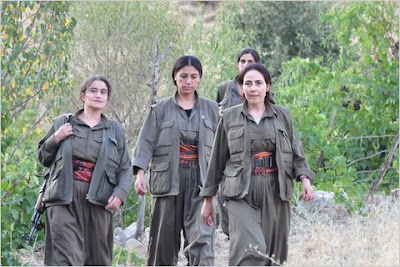 To the extent they still exist and are active, the modern communist inspired insurgency places great emphasis on the incorporation of women into fighting units? Those insurgencies world wide to include:

See at this YouTube web site portraits of some PKK women fighters. As is mentioned in some comments to the video, the Kurds are an Indo-European people speaking an Indo-European language in either case NOT related to the Turk or Arab! A distinct people whose national aspirations have gone unfulfilled ever since the time of T.E. Lawrence!

Regardless of political orientation I must admit I have a large degree of admiration for these women!