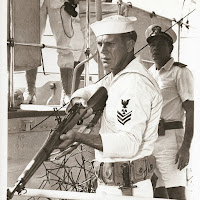 "Fighting the bloodthirsty Chinese river pirates who recognize no man-made law and regard human life as a joke is one of the major jobs of Uncle Sam's Yangtze patrol. Six American gunboats travel daily back and forth along the 1,000 tortuous miles [1,600 kilometers] of the Yangtze between Nanking, capital of China and Chungking, deep in the interior."

From a comment by L.C. Rees to a recent isegoria.net blog entry:

"The Yangtze Patrol started as early as 1854"

American naval vessels sailing the Yangtze river inland almost the entire navigable length I had thought a relatively recent phenomenon, more or less from the era between the two Great Wars [WW1 and WW2].

Read here and here details of the Nineteenth Century patrols. American naval contingents hardly alone with such missions far inland from the ocean. Other European powers also displaying such military might on the river also.

You learn something new everyday and are more the better for it!