From that era of the Second World War and for a period of FIFTY YEARS within the context of American submarine operations and especially operations in the Arctic regions this man a most significant figure. 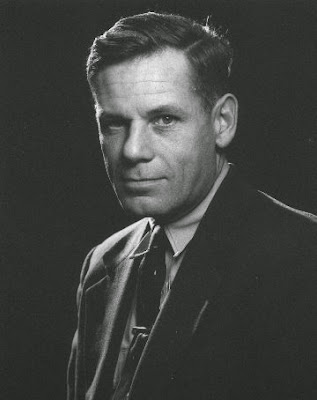 "For 51 years, Dr. Lyon worked for Space and Naval Warfare Systems Center, San Diego (SSC San Diego) and its predecessor organizations . . .  The lab [Space and Naval Warfare Systems Center] was used during World War II for testing, repairing and modifying submarine equipment and harbor defense systems in the Pacific Ocean. During the war, German U-boats in the Gulf of St. Lawrence were undetectable, because sonar failed under the surface ice. Dr. Lyon addressed this problem by designing and testing sonar and oceanographic equipment for the submarine USS Boarfish (SS-327) and participating in the ship's first under-ice dives."

That Arctic Submarine Laboratory [ASL] possessing a pool designed to conduct UNIQUE research and development of apparatus as germane to arctic undersea warfare. A pool also perhaps UNIQUE as to capability in the entire world.

"The Arctic Experimental Pool is one of a kind in the Western Hemisphere (and maybe throughout the world) that can grow true sea ice in the same manner as nature grows sea ice in the Arctic but with predictable and controlled conditions. [April 1993]"

"The Arctic Submarine Laboratory was a research facility of the U.S. Navy's Electronics Laboratory in San Diego, California. . . . and was focused on scientific exploration of the Arctic Basin, and particularly providing the capability to operate attack submarines in the Arctic under the ice canopy."

THE ASL AND THE POOL FACILITY AS A COST SAVING MEASURE SOME YEARS AGO NOW BEING DEMOLISHED, OVER THE STRENUOUS OBJECTION OF DR. LYON.

"The Arctic Submarine Laboratory [ASL] was demolished in 1996, two years before the death of Dr. Lyon, to expose the remains of the 1916 Battery Whistler, a resource deemed to be more important by the USN."

ASL still in existence but their Internet web site no longer active?

AND WITH HINDSIGHT THE OBJECTIONS OF DR. LYON ARE SEEN TO BE RATHER PRESCIENT! DESTRUCTION OF THE POOL WAS A DISASTER FOR WHICH THERE IS NO VIABLE ALTERNATIVE? INCREASED MILITARY ACTIVITY IN THE ARCTIC BY A VARIETY OF WORLD POWERS NOTED, OF WHICH SUBMARINE WARFARE UNDER THE ICE WILL BE AN INTEGRAL PART OF ALL OPERATIONS.