Thanks to the Israeli web site YNet we have an interesting topic. The female combat soldier. Lieutenant Noy. Israeli female combat troop - - and now commander of a sniper platoon!

"'Guys were a bit surprised to see me reaching the peak and firing, but were mostly supportive,' Second Lieutenant Noy says after making history in IDF" 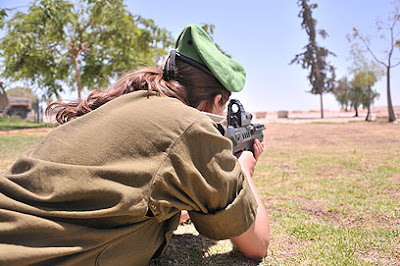 The sniper platoon as commanded by Lieutenant Noy organic to the Caracal Battalion. Caracal a military combat unit unique to the Israeli army, totally mixed men and women, positions with the Caracal not gender specific.
"The Caracal Battalion is an infantry combat battalion of the Israel Defense Forces that is composed of male and female soldiers of Jewish and Arab descent."

"The battalion is named after the Caracal, a small cat whose sexes appear the same."

"Caracal is currently assigned to protect Israel's southern frontier with the Sinai Desert where they face Bedouin smugglers, Palestinian infiltrators and even Darfur refugees seeking sanctuary in the Holy Land."

That sniper platoon using the M24 sniper rifle! Firing the 7.62 mm NATO round and a very effective and deadly weapon, proven in combat over many decades now.

Women indeed can make better snipers than men? More observant and able to concentrate longer and perform better at repetitive tasks that require attention to detail? Some Serb snipers in Sarajevo were known to be women, and approached their job with a characteristic impressive ruthlessness that was noted!