Hot off the presses!

Here with the latest and newest addition to the Iranian military arsenal.

A flying boat of indigenous design and manufacture, apparently pretty sophisticated from what I see. 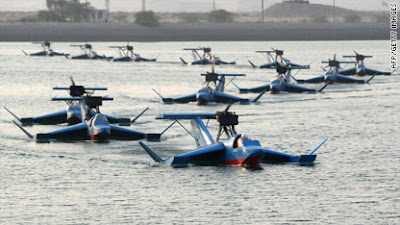 NOT having, at least in the initial "mark", a formidable capability. At this point, merely a surveillance aircraft not possessing much in the way of an offensive threat?

"The craft, dubbed the Bavar 2, is armed with a machine gun and carries surveillance cameras"

"bloggers poked fun [2006] at Iran’s so-called stealth technology, saying the flying boat looked like something anyone could buy in kit form from mechanical magazine ads."

I am NOT poking fun at the Bavar. This could very well be one more area of concern for the U.S. Navy. These little itty-bitty flying boats COULD in the future pose a challenge to an aircraft carrier or any other American warship for that matter.

The Iranians will be able to produce this low technology but still "stealth" type of flying boat in profusion. That is whole point of using such low technology. You can build with relative ease a whole bunch of these flying boats very cheaply, deploy them considerable numbers, disperse to any location WHERE THERE IS WATER and attack targets in the low-level attacker mode!

[it would interesting to know if Bavar works well in the ground-effect mode!]

If any of the Bavar are ever able to carry a TORPEDO, we may very well see in the future a type of combat as last seen almost seventy years ago now - - during the Battle of Midway [1942]? A concentrated mass of Bavar in numbers overwhelming defenses!

An asymmetrical attack weapon? See what you will. My conclusions differ with that of the "experts"? You decide for yourself.

Sorry, but the "Bavar 2" is of no significance.

It is a wing in ground effect vehicle, capable of only limited flight. Which, by default makes it a "sea skimmer" in the eyes of the PHALANX system.

PHALANX was designed to handle sea skimming missiles at low altitude and high speed ( 500 plus knots ). The BAVAR 2 will only be capable of a fraction of that speed. Once the PHALANX system is energized, and stops laughing, it will easily remove these small craft from the air.

At greater ranges, the SM 4 could easily deal with them as well. The "Standard" missile is capable of anti-aircraft, anti-missile and anti-ship engagements. This fits perfectly with the nature of the Bavar.

With respect to "stealth", the Iranian claims are amazingly unfounded. That large metal box housing the engine aft of the cockpit WILL show up on any conventional RADAR, and it will show up from miles away.

Minimal detectable range based on the engine alone with an off the shelf Furuno will be roughly 20NM, and that's assuming the rest of the craft does NOT refelct RF energy ( which the pilot will ).

All Iran has succeeded in doing is creating more targets in an already cluttered region.

In a modern combat environment, engaging any AEGIS equipped US warship with these will be akin to the old Nintendo Duck Hunt game.

Bert says: Whoa! Thank you Scott. This is the type of comment to the blog I have long desired. Phalanx [CIWS], AEGIS, and even a F-18 flying CAP can take these flying boats out! I guess my concern would be a proliferation of attackers all at once overwhelming the defenses in suicidal attack!

Hi!
I'm an Iranian, I want to say this weapon is not famous in inside of Iran and it is Iran's typical weapons.
If you want to know about our weapons search informations about advanced weapons like (for example) :
1. Sejjil 2
2. Shahab 6
3. Jamaran naval destroyer (Moaj project)
and ...
There are many Iranian made weapons and most of them are advanced, but I don't know name of all of them.

Phalanx can take them out?
Only up to 2-3km range!

SM4 can take out missiles and aircraft so can take out this one?
Only if radar horison permits, maybe from 10km, if it is capable agains sea-skimmers of this speed. Remember tracking algorithm are made for 0.5-1 Mach targets, not 0.1M. This makes those difficult to be differentiated from noise.

Then again why should you shot down this shit with SM4 that cost 10 times more? Enemy will have those things in numbers once the tactic is identified as the only real US defense.

Overall you make a lot of vague logic transitions in this analysis.
It WIG works, it can deliver a torpede from outside of existing modern AA defence zones, this is a fact.

You think the pilot will reflect significant amount of energy? How you differentiate it from 10000 waves round him?

You make a total mashup of assumptions, like "RPG can kill a tank, RPG is a rocket propelled grenade, so an army probably has thrown grenades that should kill a tank alrady". It doesn't works like this at all and all reveals once you learn how those systems work.

Iran has this tendency to come up with these wierd and wonderful ideas of weaponary that I must say are quite creative, sometimes even laughable. But thats not to say they won't work. I believe tactically, if they use all these weapons together in a combined arms attack: the Bavar 2 units skimming the surface working with fast attack boats to form a screen for diesel submarines and their destroyers and frigates, who would attack with supersonic Anti-Shipping Missiles supplied by Russia or China (Possibly P-500 or YJ-91) and S-400 SAM units covering against US aviation. They can then any combination of Chinese built J-10 and FC-1 or Russian built MiG-29 and fighters will fly escort CAP for torpedo-armed Saeqeh and Q-5 strike planes armed with Air-launched Anti-Shipping Missiles, there may even be the possibility of them obtaining heavy attack aircraft, maybe Su-32s from Russia or JH-7 from China, or strike fighters like the Russian Su-30, then they could give the US Navy a real run for heir money.

As for claims of stealth, this simple little ground effect plane can easily be made of plywood which hardly reflects any radio energy.

As well as all that it be noted that Iran is also capable of launching scud missile strikes or even seaborne invasions against Bahrain which hosts the US Navy HQ in the Middle East (CENTCOM), Kuwait, which hosts the US CENTCOM's Army HQ. That's not all, if war does break out, Saudi will most definately be the forefront of all attacks against Iran. Coalition airstrikes would certainly be launched mainly from Saudi. Iran can retaliate by attacking Saudi with bio-chemical weaponary launched from Scuds. Iran may even be daring enough to make a D-Day style invasion against Saudi covered by Russian S-400 Missile units and led by Russian and Chinese built combat aircraft. Even that's not all, if war breaks out here, Iran may well instigate Hezbollah, Hamas and Syria to attack Israel to divert US attention. If that is the case, most of the countries in Arab world would terminate their cooperation with the US due to involvement of their common enemy Israel. They could also instigate further uprising with the Iraqi and Afghan Insurgency. Russia may well say no and enter the conflict on Iran's side if the Coalition does too well. China could use this oppotunity then to break out of the First Island Chain whilst the US is dealing with Iran.