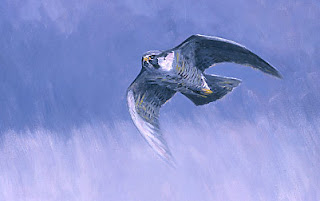 Here is one of those things liked by Bert.

Aeronautical and jet engine designers, encountering a problem for which they had no remedy, found the solution, from within the world of nature, all the mathematical equations and science of man being "trumped" by the "technology" of the peregrine falcon.

"Falcons are known for their high speed flight, and the Peregrine is thought to be the fastest bird . . . [clocked around 200 MPH/320 KPH in a vertical dive] Incidentally, in the making of airplanes, especially jets, humans came onto a problem. As planes got faster and faster, the engines [jets] started choking out at a certain speed. It seems that the air, instead of going into the cowl of the engine, encountered a wall of still air and engine cowl and so split and went around the engine. Puzzled, the researchers wondered how the falcons could still breathe at such incredible speeds. Looking at the falcon's nostrils, they found the answer. In the opening of the nostril is a small cone that protrudes a bit. Fashioning a similar cone in the opening of the jet engine, they discovered that the air could pass into the engine even at great speed. Once again a human invention is preceded by an animal adaptation."

"Aircraft designers have imitated the falcon's breaking trick in modern jets. Fighters that fly at supersonic speeds, like the SR-71 "Blackbird," have a falcon' like cone at the intake where air is pulled into the jet engine, to slow down the flow of air. These inlet cones maintain proper air flow and air pressure into the jet's compressors and turbine."

The peregrine falcon, the fastest animal alive [?], while in a near vertical dive, a stoop, with wings folded back, achieves the fastest velocity attainable by any living creature.

A speed that normally would make inhalation impossible, if not downright dangerous. The falcon might actually die during a stoop, being not able to breathe!! Mother Nature, however, long ago, has given the bird an amazing adaptation that allows the peregrine to hunt and kill prey, diving on target with astounding speed.

That small cone, at the inlet of a jet engine, was considered to be a major breakthrough? Prior to that, the feasibility of the jet engine was somewhat in doubt? A simple technique - - a biometric solution, copied from the peregrine falcon, was beyond the minds of the greatest design engineers and physicists?

Is the designer of the peregrine falcon, which inspired our greatest aircraft designers, really named "Mother Nature"?