Thanks here in all cases to Avatar Press and Garth Ennis.

Came across this serendipitously. Great stuff. Graphic art of the most superlative type. A total military dimension to it. Garth Ennis knows his military history, and includes with totality in all his graphic art works.

This particular graphic art is entitled, "303". "303" as in the caliber of the British SMLE rifle. The eternal British bolt-action still in use!!

In this particular instance, carried by a Soviet Spetsnaz officer in Afghanistan. 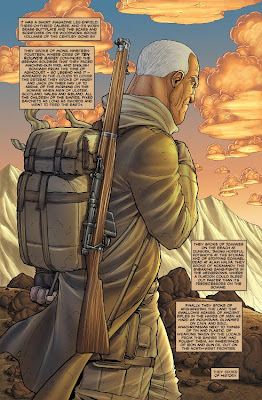 "An introduction to 303 by Garth Ennis"

"This is the strangest damn thing I've written in a long, long time."

"It's the story of a rifle, first and foremost, a .303 calibre Lee Enfield bolt-action rifle, almost a hundred years old but none the worst for it. This was the weapon that took the British army through two world wars and survived in its service until long after the second; it still shows up today from time to time, carried by tribesmen and guerrilla fighters in some of the world's most brutal conflicts. The Lee Enfield is one of the great success stories of killing technology"

[AND STILL IN USE TODAY BY THE UNITS OF THE CANADIAN RANGERS, PATROLLING THE FAR NORTH!!]

And from the text of the graphic novel:

"It was a short magazine Lee-Enfiled, three-oh-three calibre, and its worn brass butt plate and the scars and scratches on its woodwork spoke volumes of the century gone by."

"They spoke of Mons, nineteen-fourteen"

"They spoke of Tommies on the beach at Dunkirk."

"Finally, they spoke of Afghanistan, the land that swallow armies, of ancient rifles in the hands of men as hard as mountains."

"Anachronisms next of things of tin and plastic."

See further previous entries of mine regarding the SMLE.

The SMLE is a favorite of mine. As has been stated, an anachronism that has been around for a long time. And in the hands of a TRAINED SHOOTIST, VERY DEADLY, AND ALWAYS WILL BE!!

And thanks again to Garth for some great stuff. The man is good. Combines artistic talent with story telling with a manner that I envy!!