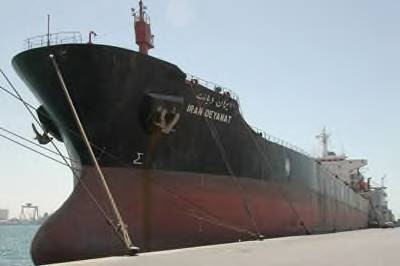 The Iranian ship hijacked by Somali pirates, the latter who became sick with the symptoms of radiation poisoning, was - - an enormous dirty bomb??!!

Read it all from Devorah, through Baron Bodissey at the Gates of Vienna web site:

"She [the Iranian ship] was an enormous floating dirty bomb, intended to detonate after exiting the Suez Canal at the eastern end of the Mediterranean and in proximity to the coastal cities of Israel. The entire cargo of radioactive sand, obtained by Iran from China (the latter buys desperately needed oil from the former) and sealed in containers which, when the charges on the ship are set off after the crew took to the boats, will be blasted high into the air where prevailing winds will push the highly dangerous and radioactive cloud ashore."

"The ship has a crew of 29 men, including a Pakistani captain, an Iranian engineer, 13 other Iranians, 3 Indians, 2 Filipinos, and 10 Eastern Europeans, stated to be Albanians."

A CREW OF ALL MUSLIMS [???] ON A MISSION FOR WHICH THERE WAS NO BACKING OUT OF? PERHAPS THOSE CREWMEN DID NOT EVEN KNOW WHAT THEY WERE GETTING INTO OR WHAT SORT OF CARGO WAS BEING CARRIED?
I would admit, "stories" like this have a life of their own. Symptoms of radiation poisoning do catch a lot of attention and create speculation, sometimes not warranted!

And - - that radioactive sand - - if that is what it is - - WOULD NOT HAVE TO BE HIGHLY RADIOACTIVE TO CAUSE PANIC OF AN UNPRECEDENTED NATURE! Even minor doses of radiation cause alarm and trepidation, even if the dose is of a minute nature. JUST THE THOUGHT OF BEING AROUND RADIATION - - EVEN IN NON-HAZARDOUS QUANTITIES - - CAN SET OFF AN EMOTIONAL REACTION FOR WHICH THERE IS NO CONTROLLING!
coolbert.
Posted by Albert E. at 3:59 PM