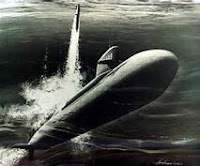 From Strategy Page an analysis of the recent failure of a Royal Navy Trident ballistic missile firing but much more than that!

That initial class of American SLBM  warships firing a Polaris missile THAT WARHEAD OF WHICH WAS HIGHLY UNRELIABLE!! 75 % FAILURE RATE!! Neither the submarine or the missiles defective but the warhead at question!

See my previous blog entry regarding this matter:

As noted by Strategy Page:

"Problems with SLBMs are not new. During the early 1960s, the warhead of the American Polaris SSBN would not detonate. The error was not detected for a while. When it was, the problem proved immune to numerous solutions. Meanwhile, the missiles might as well have carried rocks in their warheads."

EVEN IF ONLY ONE-QUARTER OF THOSE SLBM WITH ATOMIC WARHEADS MADE IT TO TARGET AND DETONATED THAT ALONE WOULD BE SUFFICIENT DETERRENCE OF ITSELF!! THE THREAT AS PERCEIVED MORE THAN ADEQUATE EVEN WITH A 75 % FAILURE RATE!!