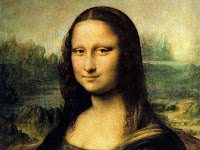 Still another extract with my commentary WW2 headlines from:


"ITALIANS ASK FRANCE TO GIVE UP 'MONA LISA'"

"Works of da Vinci and Titian Are Called 'Loot' of Napoleon"

"ROME, July 15, (UP) The University of Rome through its official organ Fascista demanded that France return all of the art works 'looted' from Italy by Napoleon, including Leonardo da Vinci's priceless 'Mona Lisa'."

NO! Not asking. DEMANDING!

The Mona Lisa evidently [?] not stolen by Napoleon! The painting legitimately purchased much prior by the French royal family.

That Italian military contribution during the Battle of France [1940] very poor and lackluster. But the conqueror does want his spoils!

Efforts to repatriate the Mona Lisa to the land of native origin continuing without success. But being done peacefully.