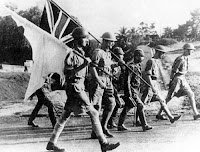 Yet again still more extracts with my commentary WW2 headlines from:

"WASHINGTON, Feb. 14 - - Ten weeks ago today at Pearl Harbor the Japanese won their first major victory of the war. Last week, as thousands of fanatical little fighters swarmed across the Johore Strait onto Singapore Island they had won their second great victory . . .

"LONDON, Feb. 15 - - Singapore has fallen. The long dreaded news that the key British base of the Pacific and Indian Oceans would be captured by the Japanese - - a major reverse clearly foreseen many days ago - - was announced tonight by Winston Churchill"

SINGAPORE WW2 RATED AS THE WORST DEFEAT IN ALL OF BRITISH MILITARY HISTORY!!

HEY! WHAT HAPPENED? BEFORE 7 DECEMBER 1941 ALL IN SINGAPORE WAS FINE. SO WHAT TRANSPIRED THAT WENT SO WRONG?