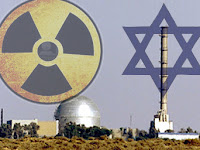 From the latest DEBKAfile newsletter and as reported this ominous threat as having been made by the supreme leader of Hezbollah:

"Hizballah's latest spate of threats against Israel reached a new peak Thursday, March 2, with the release of a videotape claiming to expose nine locations allegedly tied to the production and assembly of Israel's nuclear weapons.. The Lebanese Shiite terror organization says it possesses precise missiles for wiping out Israel's nuclear infrastructure and lists addresses for all nine locations. In a previous article, DEBKAfile accounted for the heightened bellicosity of Hizballah's leader Hassan Nasrallah on the grounds of Bashar Assad's permission for Hizballah to launch missiles against Israel from Syrian soil as well as Lebanon."

SUCH A THREAT IF FULFILLED MIGHT RELEASE A RADIOACTIVE PLUME OF DEBRIS THAT COULD NOT BE CONTAINED.

Only will invite Israeli retaliation that will be that much more massive and widespread, a no-holds-barred type of warfare to the detriment of everyone.