More on the deployment of the Stryker combat behicles to Syria. Those Stryker carrying American Ranger units? Thanks to Freeper.

"US Stryker Deployment to Manbij, Syria Appears to Have Been a Blocking Move"

"Those big armored fighting vehicles are not inconspicuous — and that appears to have been the point. Last weekend, US Stryker armored fighting vehicles appeared seemingly out of nowhere in Syria and descended onto the Kurdish-held town of Manbij. Their arrival was anything but inconspicuous, as the convoy of multiple Strykers, in various configurations, along with tricked-out Humvees rolled across the Euphrates river in broad daylight, with giant American flags whipping in the air above them. After we reported on the story, the vehicles appeared to have made it to Manbij, and proceeded to move all around the vicinity of the city..." 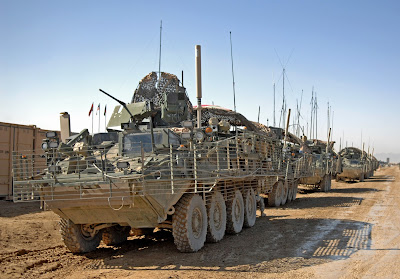 THIS IS EITHER A SHOW OF FORCE OR RANGERS AS OCCUPYING A BLOCKING POSITION?

Show of force: A show of force is a military operation intended to warn (such as a warning shot) or to intimidate an opponent by showcasing a capability or will to act if one is provoked.

Blocking position: A defensive position so sited as to deny the enemy access to a given area or to prevent the enemy's advance in a given direction.

A blocking position of which the mission is to establish a strict demarcation line? That SDF objective Raqqa and the mission to attain the expulsion of the Islamic State INTERFERENCE by outside forces not desirable?