Yet more still extracts with my commentary WW2 headlines from:

"STOCKHOLM, Sweden, Feb. 16 (AP) - - The German -controlled Scandinavian Telegraph Bureau said today that 70,000 persons had been killed in this week's Allied bombings of Dresden. The city has been cut off from all communication with the rest of Germany as a result of destruction of the telegraph station, post office, railroad station and high command headquarters, the report said." 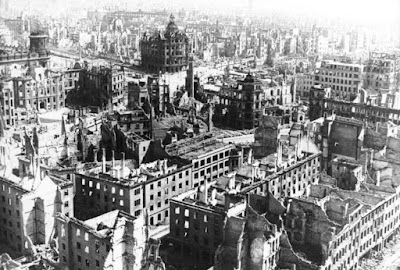 Dresden subjected to both saturation and fire-bombing. Image courtesy of Bundesarchive.

That amount of damage all done in a single day with enormous human casualties. 70,000 DEAD in the immediate aftermath of the bombing. That figure disputed with alternative far-ranging numbers as proposed by various advocates.

THE DESTRUCTION OF DRESDEN BY THE COMBINED ALLIED BOMBER FORCE A POINT OF CONTENTION AND CONTROVERSY TO THIS DAY.

See my previous blog entry the topic of which was Dresden and that allied saturation bombing: