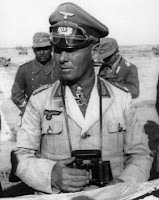 Once again more extracts with my commentary WW2 headlines from:

"THE FALL OF TOBRUK"

"In the seven moths that it stood last year, surrounded by Axis forces and hurled back every assault, Tobruk became a symbol of courage and resistance.Its sudden fall coupled with the almost simultaneous loss of Bardia and Bir el-Gobi is a hard blow"

"Presumably the Nazi campaign in Libya is a prelude to a full-scale assault on Egypt in an effort to drive the British from the Mediterranean and conquer the entire Middle East".

Tobruk the capture by the Axis a defeat for British Imperial forces, that predominant contingent at Tobruk consisting of South Africans.

The Axis objective YES to expel the British from the Middle East and perhaps even a continuation of efforts to capture the oil fields of Iraq!

ADD TOBRUK TO THAT LIST OF NEAR CONTINUOUS BRITISH MILITARY DEFEAT FOR AN ALMOST  TWO YEAR PERIOD SINCE THE FALL OF FRANCE [1940].