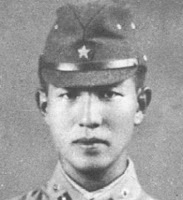 Continuing with more extracts with my commentary WW2 headlines from:

Rather than merely recounting the sinking of the USS Wasp aircraft carrier that fighting ability of the Japanese as described rather profound:

"How did it happen that the heathen had more guts than brains to throw himself into the face of sure destruction to pick off the ripe plum in the middle of the force? It was because we are up against the toughest proposition that the world has seen, despite the observation before the war that he was a mimic, he was too myopic to fly, he didn't have financial stamina for a sustained war, and that inbreeding and syphilis had made him unfit for any of class of combat work . . He has displayed resourcefulness and initiative and military intelligence and full understanding of the offensive spirit. He wages no war of limited liability and recognizes the expend-ability of both men and machine in the balance of the goal to be attained. His every soldier and sailor has an awesome inspiring attitude of courage that makes all men pause."

GRUDGING RESPECT AND EVEN ADMIRATION FOR THE FIGHTING ABILITY OF THE JAPANESE MILITARY MAN ACKNOWLEDGED!

All hands fully aware the war in the Pacific was not going to be short and easy. Far from it.