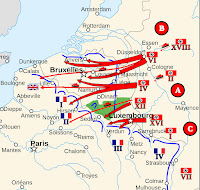 "LONDON, MAY 14 - - News of the virtual capitulation of the Netherlands to the German jackboot brought home to the British public today something for which the government has been preparing them since last week - - serious reverses in the Low Countries."

"THE ALLIES LOSE A BATTLE"

"The surrender of the Belgian Army means that the Germans have won the battle for the Channel ports."

"The Allies have lost the aid of 300,000 to 600,000 Belgians - - perhaps eight to sixteen divisions - - and an undetermined number of British, French and Polish troops, enclosed in the German pocket in coastal Belgium and Northwestern France are faced with extreme peril."

NOT ONLY SERIOUS "REVERSES" BUT THE RESPONSE OF THE ALLIES TO EVENTS AS THEY TRANSPIRED POOR, LACKLUSTER, AND EVENTUALLY FATAL!

Response with alacrity and inspiration needed, Allied high command sluggish and unimaginative, not changing according to the dynamics of the situation!!