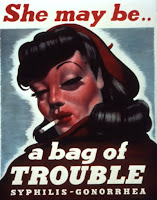 NOT "professionals" but others referred to as "local talent" to blame for an epidemic plaguing American servicemen.

"local talent - - so-called charity girls or 'chippies' - - is figuring more and more prominently in the spread of venereal disease."

Back in my day [Vietnam War era] it was the RED ROSE and the BLACK LACE! Beware!

Penicillin and the use of same as treatment for venereal disease not available at the time. Traditional treatments for VD working poorly and somewhat painful!!