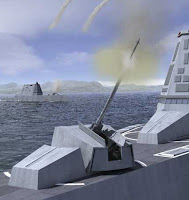 More extracts from that original article as seen at Strategy Page.

"A century before the DDG 1000 [Zumwalt class destroyer] showed up there was the Mississippi class battleship that displaced 14,400 tons, was 382 feet long, and 77 feet wide. A crew of 800 operated a variety of weapons, including four 12 inch, eight 8 inch, eight 7 inch, twelve 3 inch, twelve 47mm, and four 37mm guns, plus four 7.62mm machine-guns. There were also four torpedo tubes. The Mississippi had a top speed of 31 kilometers an hour, versus 54 for DDG-1000. But the Mississippi had one thing DD-21 lacked, armor. Along the side there was a belt of 23 cm (9 inch) armor and the main turrets had 30 cm (12 inch) thick armor. The Mississippi had radio, but the DDG-1000 has radio, GPS, sonar, Aegis radar, electronic warfare equipment, and the ability to shoot down ballistic missiles. The century old Mississippi class [BB-23] ships cost about half a billion dollars (adjusted for inflation). The DDG-1000 class destroyers cost over $4 billion each, thus possessing the price, size, and firepower, if not the name, of a battleship. The U.S. Navy could no longer afford battleships and given the continued inability to control costs meant the navy could not afford enough of its new DDG-1000 destroyers either."

NO AMMUNITION FOR THE DDG CLASS 155MM ADVANCED GUN SYSTEM [AGS] TO BE PURCHASED EITHER! COST OF $1 MILLION PER ROUND PROHIBITIVE! ORIGINAL COST OF 155MM AGS ROUNDS BASED ON A MASS PRODUCTION  OF AMMO FOR TWENTY-SEVEN VESSELS AND NOT THREE! DDG NOW A SHIP WITHOUT AMMUNITION FOR THE MAIN GUNS!!

Mississippi si, Zumwalt no? You decide.