Here with a blog entry having a quasi-military dimension. In both cases thanks to Freeper.

"The Russians are coming! Yes, the Russians are coming to help fight fires here in California with their amphibious Be-200 firefighting aircraft. The plan has not yet been finalized, just a handshake agreement between Russia and US. The Be-200 aircraft will be stationed in Santa Maria" 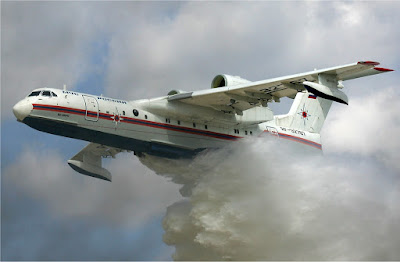 Image thanks to Dmitriy Pichugi. The Be-200 is  an amphibious aircraft and can scoop up water while at low-level flight. "The aircraft is also capable of being configured for anti-submarine warfare [ASW] duties."

2. "Instead Of Water, Military Drones Helping Fight Fire With Data"

"Firefighters have been working nonstop to put out multiple wildfires ravaging land and homes from the hills to the beaches of Southern California. High above the flames and smoke, heavy duty materiel is helping them better battle those blazes."

MILITARY DRONES WITH MULTI-SPECTRAL IMAGING CAPABILITY AND AMAZING LOITER TIME, DAY AND NIGHT ABLE TO PROVIDE REAL-TIME MACRO/MICRO INFORMATION TO THE BATTLE STAFF PLANNERS OF THE FIREFIGHTERS ON THE GROUND!!THE BATTLEFIELD COMMANDER, THE FIREFIGHTING MANAGER IN CHARGE ABLE ALMOST WITH A SINGLE GLANCE ABLE TO MAKE INFORMED AND CORRECT DECISIONS!

And thank you Russians. Peace is in the air almost literally so!