Additionally more war art the inspiration of which was "The Third of May 1808". Goya having inspired other artists of great repute to include Manet and Picasso. 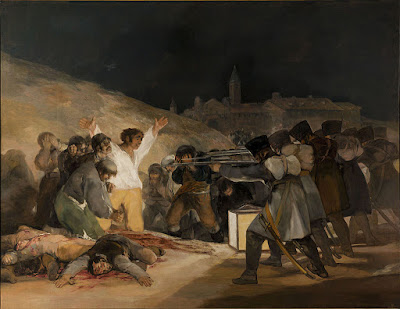 The original as by Goya! "The Third of May 1808 . . .  is a painting completed in 1814 by the Spanish painter Francisco Goya . . .  In the work, Goya sought to commemorate Spanish resistance to Napoleon's armies during the occupation of 1808" 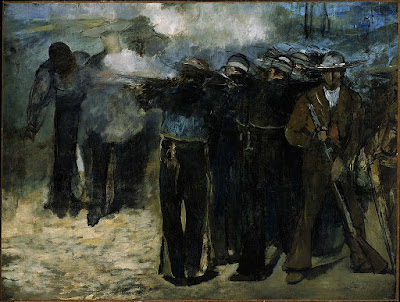 An impressionist work by Manet. "The Execution of Emperor Maximilian is a series of paintings by Édouard Manet from 1867 to 1869, depicting the execution by firing squad of Emperor Maximilian I of the short-lived Second Mexican Empire. Manet produced three large oil paintings, a smaller oil sketch and a lithograph of the same subject." 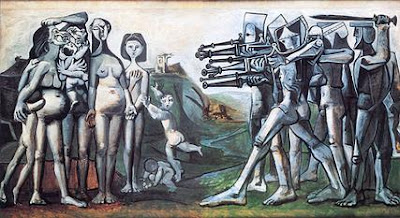 And finally from Picasso. "Massacre in Korea is an expressionistic painting completed on January 18, 1951, by Pablo Picasso; it criticizes United States intervention in the Korean War . . . Massacre in Korea depicts civilians being killed by anti-communist forces . . . Picasso's work is influenced by Francisco Goya's painting The Third of May 1808, which shows Napoleon's soldiers executing Spanish civilians. . . It stands in the same iconographic tradition of an earlier work modeled after Goya, [and] Édouard Manet's series of five paintings depicting the execution of Emperor Maximilian, completed between 1867 and 1869."

Imitation is the highest form of flattery so it is said. Probably so. In that regard Goya highly regarded by others in the profession, profoundly so even!