This blog entry borderline nonetheless relevant. World War One war art. Art of the Great War in particular characterized by an illustration is seen in: "The Reader's Companion to Military History". 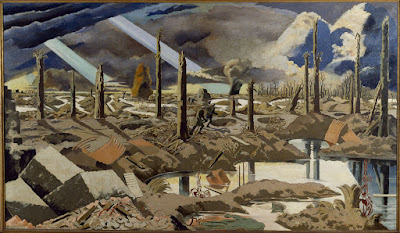 "The Menin Road" - Paul Nash. "The Menin Road is a large oil painting by Paul Nash completed in 1919 that depicts a First World War battlefield . . . The painting is considered one of the most iconic images of the First World War". A landscape totally devoid of any form of life, blown to smithereens, cratered and  remnants of what once was limited to branch[less tree trunks standing as would a totem-pole. Human beings if present leading a troglodyte existence in dugouts or trenches. Other life forms if indeed found limited to an infestation of rats, prodigious numbers present! 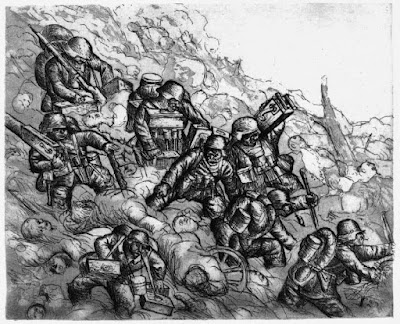 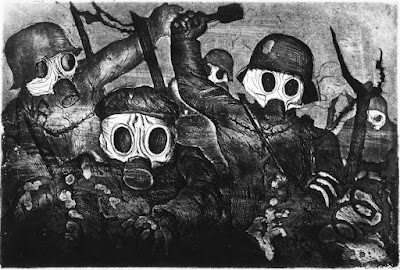 "Stormtroopers Advancing Under Gas" - - Otto Dix. German storm troopers assail an enemy position. Men their appearance not even human. Helmets, masks, gloves, etc. Not really persons recognizable as such. The industrialized, mechanized, mass production, by-the-numbers, totally dehumanized type of warfare as had never been seen before.

The subject matter done in a style both horrific and depressing, morbid even. But outstanding art in all cases.