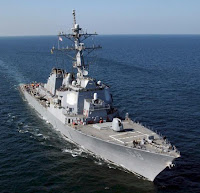 Back to the future, navy style?

From an item as seen Strategy Page and extracted from same:

"December 7, 2017: In October 2017 the last of the three U.S. Navy Burke class 'restart' ships entered service. This Cold War era design was supposed to have been replaced by a new design, the Zumwalt class. That did not work out because it took too long and cost too much to build the new Zunwalts. Meanwhile it was noted that the Burkes remained a very effective design . . . So in 2009 the U.S. Navy decided to resume Burke production."

"The DDG-1000 destroyers (and slightly larger versions designated as cruisers) would cost more than $4 billion each if built in large quantities. The Burkes cost $1.9 billion each. The last of original Burkes was ordered in 2002 and entered service in 2012."

$4 billion for a DDG type class destroyer IF the vessels had been made in mass production. Twenty-seven DDG was the goal but only three will be built now. Improved Burke class destroyers cost half and will have improved systems as originally were designed for the DDG.

Burke si, Zumwalt no! For the best too?