My intuition served me wrong on this one. My instantaneous response was that the Russian was now using raptors [birds of prey] to guard the Kremlin against drone surveillance and drone attack.

From the Sputnik Russian media outlet:

"Defending the Kremlin: Hawks, Falcons and Owls in Service"

"It is unbelievable, but true: birds help defend the Kremlin." 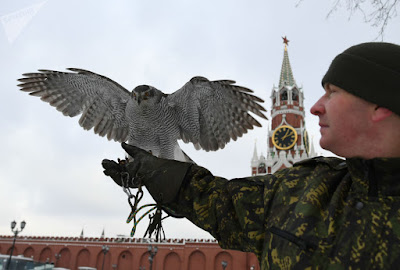 Thanks to the image from Sputnik and Ilya. Nice looking bird of prey.

"Kremlin officials use hawks, falcons and even owls to scare off crows that spoil the building’s golden domes in the heart of Moscow. Moreover, crows hunt singing birds at the Kremlin and even damage the uniforms of the Kremlin guards. So it’s no surprise that government officials have decided to use hawks and falcons against the crows. The hawks start their work early in the morning, while there are no tourists in the Kremlin. When crows see the hawks they prefer to fly away from the Kremlin walls."

NOT SO UNBELIEVABLE EITHER!

Consider a prior blog entry the topic of which was using raptors to guard military installations against drone attack: