“May I repeat that we will not let any regime bent on destroying Israel procure nuclear arms. Neither will we allow the Iranian regime to establish itself militarily in Syria, as it is planning, because its sole objective is to destroy our country.” - - PM Netanyahu.

Israel unto this point has been very circumspect and selective with regard to involvement in the Syrian Civil War. Now we have that combination of factors: 1. The apparent defeat of the Islamic State. 2. The despot Assad now having the upper hand in the conflict. 3. The establishment of a LAND BRIDGE between Iran and Syria  As a result the IDF will now feel compelled to adopt a more aggressive approach with extreme measures the norm? 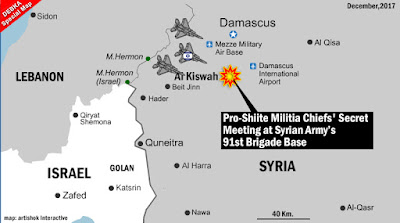 Thanks to DEBKAfile the image and the article. Various spellings of Al Kiswah exist.

"Pro-Shiite Militia Chiefs conferring on anti-Israel operations were targets of Israeli air strike An Israeli air raid early Saturday, Dec. 2 struck a group of pro-Iranian Shiite militia chiefs holding a secret conference at the Syrian Army’s 91st Brigade base near Kiswah. Iranian and Hizballah officers are reported among the casualties" 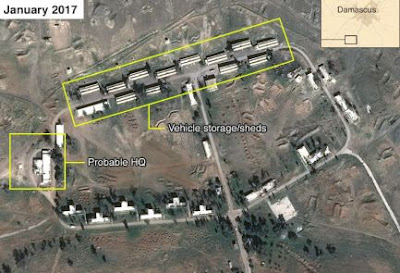 Thanks to the Sheldon Adelson Internet web site Israel Hayom this image of the "military base" as under IAF attack. Source of the image unknown.

It appears too that the Israeli Air Force [IAF] on this occasion did intrude into Syrian air space. Normally IAF attacking Syrian targets involved the firing of missiles from warplanes over Lebanon.

This could get very serious very fast. Already serious but the chances of escalation with all that will mean much worse.