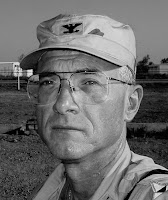 From National Public Radio [NPR] and an Amazon book review:

"Austin Bay, who is retired from the U.S Army Reserve, was recalled to active duty and served in Iraq in 2004."

"You know you must be a member of the armed forces if you know what a 'fobbit' is or what 'FUBIJAR' means or where, exactly, 'Marineland' is located. Morning Edition commentator Austin Bay, a retired colonel in the Army Reserve and a veteran of the Iraq war, explains some of the military jargon, which he's compiled in a little handbook called 'Embrace the Suck: A Pocket Guide to Milspeak'."

“'Milspeak' is one of those things that set military personnel apart from civilians. Every profession has its own slang, if you will, be it medicine, law, firefighting, or police, and so too does the military. The military’s slang, though, is one of the most unique. Military culture is based on shared sacrifice, dedication, and commitment to the country – and it is exclusive.

"MILSPEAK: Slang for military jargon, troop idioms, and Pentagonese. The perfect gift for anyone who is in the military, veterans, or who plans to serve."

"Members of America’s armed forces have their own distinctive language: milspeak. Especially since WWII, soldiers, sailors, airmen, and marines have invented and adapted their own slang vocabularies, creating a colorful insider’s lingo of bureaucratic buzzwords, acronyms, mock jargon, dark humor, and outright profanity. Milspeak gives a unique and touching insight into military life from basic training to the trenches; from the flight deck to the cockpit."

Described as SLANG BUT MUCH MORE THAN JUST THAT!!