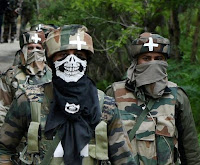 Once more as seen at Freeper.

Think more of Pakistan and India. The possibility of a regional war with the use of atomic weapons cannot be completely ruled out.

Indeed, even as we speak the two nations exchanging gunfire on the Line-of-Control [LoC], Kashmir! That line separating Indian Kashmir from Pakistani Kashmir.

THAT DIFFICULTY WITH KASHMIR HAVING LASTED WITHOUT SETTLEMENT FOR SEVENTY YEARS NOW! AND NO END IN SIGHT! RATHER THE OPPOSITE. INSURGENCY AND TERRORISM ENDEMIC TO THE AREA, TROOPS MASSED AT ALL TIMES AND ON HIGH-ALERT!

BOTH SIDES POSSESSING NUCLEAR WEAPONS AND THE CAPABILITY TO USE SAME!