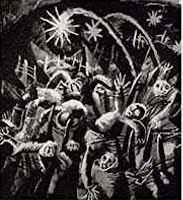 "The picture of the war was sober, gray and red its colors; the battlefield was a desert of madness, in which life was miserably dead underground. At night, tired columns rolled on crumbled roads toward the burning horizon. 'Lights off!' Ruins and crosses lined the way. No song sounded, only soft words and curses interrupted the crunching of the straps, the rattling of rifles and diggers. Blurred shadows dipped from the edges of tattered villages into endless trenches."  - - Ernst Junger.

* "Storm of Steel: From the Diary of a German Stormtroop Officer on the Western Front". [Junger]

* "Somme: Desperate Glory: The Diary of a Young Officer".  [Vaughan]

* "With the Old Breed: At Peleliu and Okinawa". [Sledge]

The Great War [World War One] producing three of the ten memoirs as listed. The British in particular also noted for their War Poets, esteemed and renowned to this very day.

"Ernst Junger served in the German front line, fighting both the British and the French for most of World War I. Young, tough, patriotic but also disturbingly self-aware, he exulted in the war, which he saw not just as a great national struggle but - more importantly - as a unique personal struggle . . . Junger kept testing himself, braced for the death that would mark his failure"

Ernst competes. Who does he compete against? Himself!