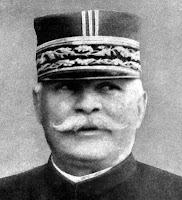 Have you ever done it ze French way?

We thank you Papa?

As originally seen at France24 and a surprise to me! That article by Stéphanie TROUILLARD.

NOT VERDUN. NOT THE NIVELLE OFFENSIVE. NO!

Battle of the Frontiers.

"The Battle of the Frontiers, fought at the outset of World War I, doesn’t have the same historical notoriety as Verdun or Somme, but it saw in one day more French soldiers die than in any other day in history."

THE FRENCH DEFENDING BY ATTACKING! ELAN, ESPRIT, CRAN! WITH A LARGE MEASURE OF DISASTER AS A RESULT.. BUT MOST OF THE GREAT WAR WAS A DISASTER, WASN'T IT?