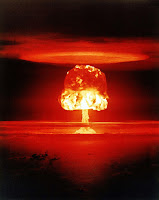 Prediction 2018. Hopefully none of these events will occur!

From the article by Robert Farley as seen at the Internet web site "Scout". This story was originally published by The National Interest

"The world has managed to make it through most of 2017 without the return of cataclysmic, great power conflict. In some parts of the world (most notably Syria) tensions have declined significantly. In others, already difficult situations have grown even more tense. Here are five crises that could lead to great power conflict over the course of 2018."

Regions and areas for possible conflict in the nutshell:

"The world remains jarringly dangerous."  [when has the world ever been not a dangerous place?]

NO South China Sea?  NO Baltics? NO Suwalki Gap? Some sort of menacing gestures are being directed from mainland China toward Taiwan? I would assume correctly [??] that "The Gulf" includes but not strictly limited to Syria?

NOT necessarily any of those potential conflicts properly categorized as A WORLD WAR? More better understood as a REGIONAL WAR? Escalation of course possible at any moment.

War or wars as fought with conventional means and NOT thermonuclear GLOBAL CONFLICT with the obliteration of all mankind?