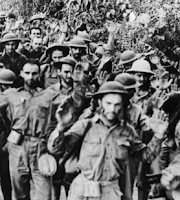 Yet one more FEEL GOOD story with a military dimension.

From a recent edition of the WWII magazine.

"MANY AMERICANS CELEBRATED Memorial Day weekend  By grilling burgers and hoisting col d beers. Four veterans of the wars in Iraq and Afghanistan picked another way to remember the fallen: they walked the route of the Bataan Death March in the Philippines, consuming half rations, limiting their intake of water, and sleeping on the ground along the five-day journey."

Josh, Nick, Margaux and Brian give the four of them high-fives and a big thank you. Job well done!!

All four founders of the Mission Memorial Day,. Read of the mission here. Additionally see the embedded video. FIVE DAYS AND SIXTY-SIX MILES!

WITH REGARD TO THE BATAAN DEATH MARCH AS EXPERIENCED BY THE AMERICAN AND FILIPINO TROOPS, THE ENTIRE ORDEAL LASTING ELEVEN DAYS, FIVE OF WHICH THE PRISONERS WITHOUT FOOD!!

This is the type of thing worth doing and much more of the same should be done and we are all the better for it.