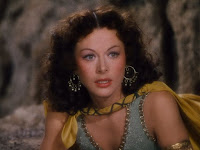 Once more as reported by the latest edition of the DEBKAfile newsletter Israeli Air Force [IAF' conduct and air strike against a Syrian target:

"Monday night, Dec. 4, Israeli aircraft reportedly attacked a weapons research center in Jamraya on the outskirts of Damascus. Lebanese sources say Israel fired six missiles, three of which were intercepted by Syria's air defense system. This would be the second Israeli air raid in three days of a military target in the Damascus area."

These missiles as fired [three intercepted] are either a Delilah or a Popeye? Air-to-ground attack missiles.

Could Hedy Lamar ever thought that fifty years after the fact an image of her in the role of Delilah would thought to be worthy of inclusion into a military-oriented blog?