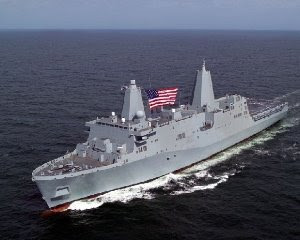 Here is the modern and now undergoing sea trails, the latest addition to the U.S. Navy, the warship USS New York.

"the fifth ship in the San Antonio-class amphibious transport dock, is the sixth ship of the United States Navy to be named for the state of New York. The ship was designed to deliver a fully-equipped battalion of 700 Marines."

"The first New York was a gondola, built on Lake Champlain in 1776, that participated in the Battle of Valcour Island. Throughout history there have been at least six United States Navy ships that have borne the name New York, after the 11th state."

Can deploy to any part of the world and "deliver a fully-equipped battalion of 700 Marines" with all their impedimenta! This is POWER PROJECTION of the most major sort.

An actual integral part of the ship is steel actually obtained from the ruins of the World Trade Center. Steel from the WTC buildings melted down and used in the construction of the USS New York!

"Twenty-four tons of the steel used in its construction came from the small amount of rubble from the World Trade Center actually preserved for posterity."

Sister ships of the New York [to be built and launched at a later date] are to be also named after sites where the 9/11 attacks occurred. Named ships will be:

"Navy announced that two of her sister ships will be named Arlington and Somerset, in commemoration of the places two of the other planes used in the attack came down: Somerset County, Pennsylvania and Arlington, Virginia."

Organic firepower of the modern USS New York is sparse. Consisting ONLY of:

Carries, and is able to deploy that Marine battalion from an array of landing craft, to include:

The USS New York is able to launch or land:

It is not specified what version of the AH-1 attack helicopters will be aboard the New York. If the "Z" version, those choppers will have the firepower of a tactical nuclear weapon, each of them. Can fire the Zuni 5" rocket if needed. The same as having flying artillery at your disposal.

Go and see the web site for the latest incarnation of the USS New York. The U.S. Navy does take a lot of pride in the vessels it sails and the crews that man them.