Here thanks to PG monster and his web site: "War is Over" 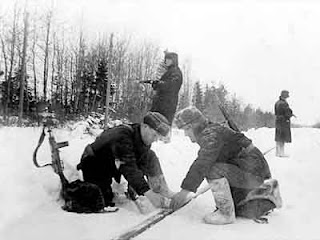 ["mining" in the Soviet sense meaning - - according to what I read, NOT just merely laying land mines as is understood in a western army - - but DEMOLITIONS!!]

The Soviet partisan campaign of WW2 is generally accepted by the "experts" to have been highly successful. An archetype to be emulated when possible.

GUERRILLA WARFARE IS MOST EFFECTIVE WHEN DONE IN CONJUNCTION WITH AND SUPPORTING CONVENTIONAL MILITARY OPERATIONS!! As was with the Soviet partisan campaign of WW2.

That tally sheet is most interesting! A list of trains destroyed. NOT just sections of rail track blown up! Trains ACTUALLY DERAILED!!
The "leader-board" for the "miners" shows:

"Some of the best partisane-miners": 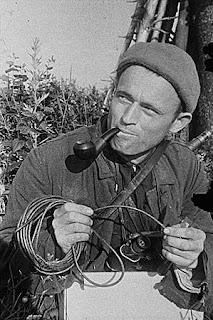 [above photo is of T.G. Dmitriev himself]

Some of those persons shown in the photos and listed in the tally sheet are "guards minelayers"?? NOT NECESSARILY PARTISANS! Soviet active duty military men, demolitions experts, proficient at all aspects of unconventional warfare!

Persons ["guards minelayers"] skilled in demolitions of all sorts, trained and experienced in the handling and employment of the latest explosives and detonating devices, parachuted behind German lines. Persons, if necessary, able to concoct explosives from common household products, McGyver-style!

Troops ["guards minelayers"] who WERE THE PREDECESSORS OF THE MODERN SOVIET/RUSSIAN SPETSNAZ [SPECIAL PURPOSE] UNITS!!
From Suvorov:

"The operations carried out by the 'minelayers' were distinguished by their daring character and their effectiveness . . . Sometimes they operated independently, at others they combined their operations with the partisans . . . The minelayers taught the partisans the most difficult aspects of minelaying, the most complicated technique technology and the most advanced tactics"