From the Chicago Tribune yesterday:

". . . The army [Nicaragua] has insisted in needs new helicopters and Navy ships to patrol Caribbean waters, where there is a boundary dispute with Colombia."

What is this? Boundary dispute between Nicaragua and Colombia? Those two nations DO NOT EVEN HAVE A CONTIGUOUS BORDER! 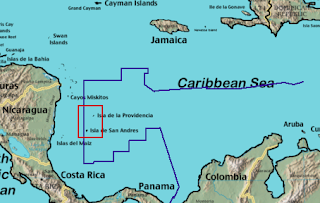 Territorial disputes, islands claimed sovereignty over by various colonial powers, dating from the time of Spanish conquest and continuing over into modern times by the modern independent Latin American nations!

With regard to: "Archipelago of San Andres, Providencia and Santa Catalina", the islands are inhabited, flourishing [?] with tourists seeking sun, and populated by persons who are NOT necessarily Latin by culture, but descendants of African slaves at one time owned by English Puritans!!

"Disputes" over land of course are a common source of friction between nations and can lead to war.

Are these islands worth a war or even the threat of war? Maybe - - someone in a high position - - thinks there is the possibility of off-shore oil being present?

These islands are a possible point of contention between hot-blooded Latins? Neither willing to back down! Nicaragua is again ruled by Daniel Ortega, a one-time commandante' of the ruling junta in Managua! But a much milder form of the original Daniel incarnation? Let us hope so!

More surprising Russian encroachment into territory normally part of the "American sphere"? That too!