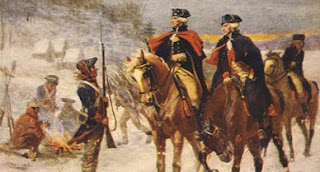 Here with surprising stuff, thanks to the wiki entry on the Battle of Minden:

The British regiments which fought at Minden, namely:

The descendents of these [regiments] are still known as "the Minden Regiments".

"When the British Infantry were first advancing to battle they passed through some German gardens and the soldiers plucked roses and stuck them in their coats. In memory of this, each of the Minden regiments marks the 1 August as Minden Day. On that day the men of all ranks wear roses in their caps. The Light Infantry wear Yorkshire white roses."

From this tradition, and to mark the heroism of the Yorkshiremen who fought, 1 August has been adopted as Yorkshire Day."

There is too, a much greater significance to the events of 1 August, 1759.

A significance directly related to the American Revolutionary War [sometimes called the American War of Independence!]. The American colonial "insurrectionists" would not have triumphed in their war against Great Britain if the events at Minden had NOT transpired as they did?

1. The dereliction of duty and insubordination on the battlefield of Sir George Sackville, latter known to the world in another incarnation as George Germaine!

"Ferdinand's [the German commander of the multi-national force opposing the French] cavalry commander, Sir George Sackville, was accused of ignoring repeated orders . . . he requested a court martial, but the evidence against him [Sackville] was substantial and the court martial declared him '...unfit to serve His Majesty in any capacity whatsoever.' Sackville would later reappear as Lord George Germain and bear a major portion of the blame for the American Revolution."

"The court found him guilty, and imposed one of the strangest and strongest verdicts ever rendered against a general officer. The court's verdict not only upheld his discharge, but ruled that he was "...unfit to serve his Majesty in any military capacity whatsoever", then ordered that their verdict be read to and entered in the orderly book of every regiment in the Army. The king had his name struck from the Privy Council rolls."

Sir George, because of his craven behavior at Minden was cashiered from the British Army and removed from any further military position, "whatsoever"!!!

BUT, NOT totally removed from governmental service. Was the Secretary of State for British colonial North America during the American Revolutionary War and is in large measure responsible for British defeat!!

"George Germain, 1st Viscount Sackville . . . who was Secretary of State for America in Lord North's cabinet during the American Revolution. His ministry received much of the blame for Britain's loss of her American colonies. His issuance of detailed instructions in military matters, coupled with his failure to understand either the geography of the colonies or the determination of the colonists, may justify this conclusion."

This is not - - "The Peter Principle"? Sackville was an incompetent who rose above his station where he had demonstrated an inadequacy, and further again - - at a higher station of responsibility, continued to demonstrate incompetence. What is this called?

The American colonialist "insurrectionists" were fortunate to have a man like Sackville on their side!!

2. "The father of the General Lafayette was killed in this battle [Minden]."

"Lafayette's father [Michel Roche Gilbert du Motier, Marquis de Lafayette] died on 1 August 1759 during the Seven Years War at the Battle of Minden in Germany, where he was shot by a British cannonball . . . His grandmother told him stories of his father's death, advising him to dislike the English."

Lafayette - - became - - at age two, a fatherless child! And a man that was taught a detestation of the English. A man who desired to avenge the death of his father, and saw an opportunity to do so during the American Revolutionary War!

Lafayette WAS a significant figure of the American Revolutionary War! History does NOT overstate the importance of this man!? A situation that became favorable for the colonists would have not transpired as it did if not for the Marquis?

All of this owed to Minden?