Here is, from the World War Two [WW2] era, a uniquely German form of military architecture:

"a blockhouse is a small, isolated fort in the form of a single building. It is intended to serve as a defensive strong point"

"Flak towers (German: Flaktürme) were large anti-aircraft gun blockhouses used by the Luftwaffe to prevent overflights of key areas in certain cities in World War II. They also served as air-raid shelters for tens of thousands of people and to coordinate air defence" 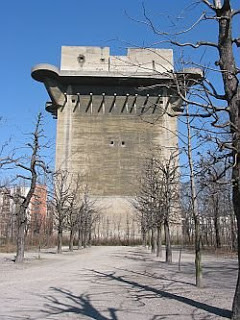 Were used in a multiplicity of ways:

* Emplacements for anti-aircraft-artillery [AAA]! [ammunition storage as well!]
* Air-raid shelters. [multi-storied structures allowing for tens of thousands of civilians to be accommodated at one time?!]
* AAA command and control facilities.

AAA units mounted atop a flak tower had a completely unobstructed 360 degree coverage, from the horizon to the zenith, in all directions, unimpeded!!

Built in a variety of "flavors". A G-tower being one of the most common. One tower, fully equipped and manned, had an enormous firepower capability. The concentration of firepower from one tower alone just had to present an awesome spectacle.

Were considered to be almost absolutely impervious to attack. Could be used in a ground defensive role as well as the AAA role. WERE USED AS SUCH DURING THE BATTLE OF BERLIN, 1945!!! AAA firing downward at approaching Soviet units!!

"With concrete walls up to 3.5 metres thick, these towers were considered to be invulnerable to attack"

"Soviets [ground forces], in assaulting Berlin, found it hard to make an impression on the Flak towers, even with some of the largest Soviet assault guns, the 203 mm howitzers. Soviet forces generally maneuvered around them, and eventually sent in envoys to seek their submission."

Some of these structures from the World War Two era still exist! Demolition is prohibitive from the cost standpoint, so sturdily were these towers built!!

"the demolition of the towers was in most cases unfeasible and many remain to this day."