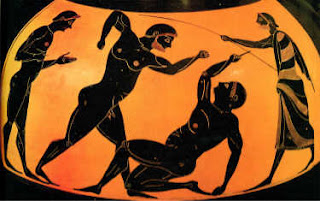 
People are fond of saying, "there is nothing new under the sun!!"


Here, from the LoneSentry web site, the special "iron ration" as issued and carried by British Commando troops during operations:

"A special ration, designed to give a man enough sustenance to enable him to operate under rigorous conditions"


And here, the diet as eaten by a Pankration athlete while in training. Pankration - - the martial art form of ancient Greece. A combination of wrestling and boxing used to train Greek warriors for mortal combat. Also practiced at the Olympics as a "sport"! A "sport" sometimes resulting in the death of a combatant.


The athletes diet consisting of:


Again, we find a diet consisting of whole grains, meat, dry fruit, and a dairy product.


Pankration is now enjoying a renaissance. After a several millennium long hiatus, the martial art form has been rejuvenated, modernized, and is now avidly practiced by a growing number of enthusiasts. Bully!!


Nothing new under the sun? You betcha!